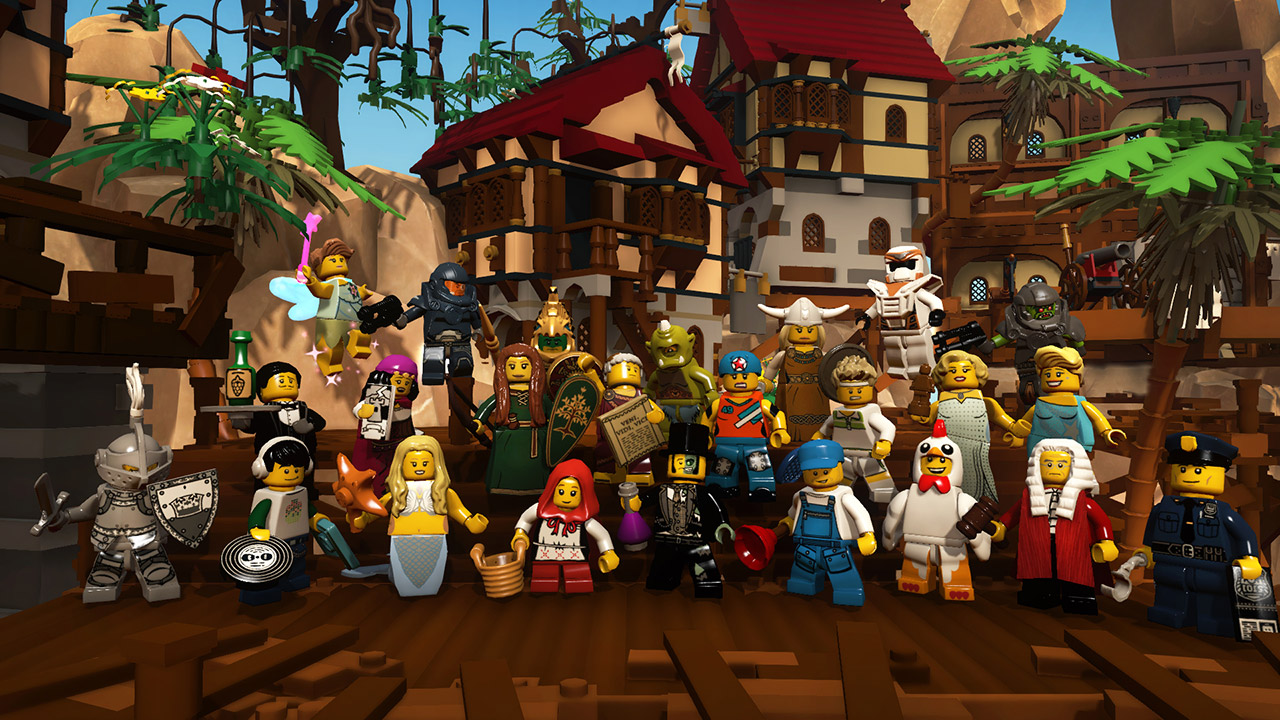 "Get ready to meet the Minifigures! Collect them all and bring them with you on grand adventures in LEGO Minifigures Online - an epic online adventure where you get to explore colorful locations such as Pirate World, Space World and Medieval World!

Play together with thousands of other players and battle your way through monstrous riff-raff as you develop your Minifigures’ unique and powerful abilities. Smash, build and collect - thousands of exciting adventures are just a brick away in LEGO Minifigures Online!

LEGO Minifigures Online will launch for PC, iOS and Android during the second half of 2014.

-  Explore many wondrous worlds of LEGO each teeming with life, detail and awesome adventure! From lush islands held by swashbuckling pirates to alien worlds where the Galaxy Patrol must battle dangers such as the mind-controlling Pluuvian Brain-Beast!

-  Find, collect and play with almost one hundred different minifigures! The Ice Skater, the Chicken Suit Guy, the Roller Derby Girl, The Policeman and many, many more; millions of LEGO fans all over the world have held them in their hands and now they can step into their shoes as they explore the world of LEGO Minifigures Online!

-  Interact with the environment around you and use it to your advantage! Smash an enemy turret and re-build it to work for you, destroy a wall to discover a hidden passage and even build machines to help you take down the big bosses! Smashing stuff definitely feels good, but as all LEGO fans will know, building something feels even better!

-  Play together with thousands of other players from all over the world! Face the adventure together or engage in awesome player vs. player battles where you must build towers, traps, mines and turrets while taking on the enemy and smashing theirs!

-  Discover unique abilities with each minifigure! Take control of the rocked-out DJ and literally drop your beats on unsuspecting enemies, or assume the role of the Aztec Warrior and go to battle making sure no one is spared your mighty spear! Maybe the Plumber is your guy? Sure; unclog those baddies and make a mess of them!

-  Gather experience and level up minifigures by smashing your way through enemies, rocks and LEGO blocks! Customize your playstyle by collecting special bricks and put them together in unique shapes to upgrade abilities such as luck and creativity!

-  Since 1975, LEGO has made more than 3600 different minifigures available and Funcom will continuously keep adding more and more of these for players to collect in-game! Funcom and LEGO are working closely together to blend the physical world of LEGO with the digital one; for instance players who purchase bags containing real minifigure will immediately be able to jump into the game and play with their virtual counterparts!
(LEGO versão Skylanders...)

-  Unravel what is surely an Academy Award Winning* story! Take on quests such as searching for buried treasure in the pirate world, rescuing the kingnapped king in the medieval world, and even helping Zeus himself in the mythology world!


Funcom today launched the Open Beta for LEGO Minifigures Online. This is the final beta phase before the game launches later this fall.

The game is currently available in English for the Windows PC in select markets. During Open Beta, Funcom will introduce localized versions of the game in German, French and Spanish, and a tablet version of the game will also be made available later. Throughout the Open Beta process, gameplay, content and the business model will be balanced, expanded and improved based on player feedback and analysis of available data. LEGO Minifigures Online is a free-to-play game with optional in-game transactions, and it should be expected that the game will evolve and grow over time.

LEGO Minifigures Online is based on the hugely popular Minifigures series of collectible toys. Players get to collect tons of Minifigures, each with their own personality and set of abilities, and take them out on
great adventures through colorful worlds such as Pirate World, Space World and Medieval World. Everything takes place online, and thousands of
players can join each other on exciting adventures and share the fun together.

As a game whose target audience is children of all ages, Funcom is making sure LEGO Minifigures Online is a fun, enjoyable and safe environment for everyone. The game is fully COPPA compliant and has a robust privacy policy. In-game chat is filtered and monitored 24/7 using Crisp Thinking technology. For children under 13, parents get special access to their child’s game account so they can easily manage their membership or make in-game purchases for them. Parents eager to learn more about this can visit the Parents page on the official website.